Much more than a straw hat and a canal...

Panama - that is the bridge between Central and South America. The country occupies the narrowest part of the Central American land bridge, which is broken here by the Panama Canal and thus connects the Pacific with the Atlantic. So a cruise on a section of the Panama Canal is certainly an impressive experience.

But what else does the small state have to offer? The country is truly still a treasure chest with many undiscovered treasures. Experience much more than straw hats and canals on our trips to Panama... - lush rainforest, mountainous volcanic landscape and picturesque Caribbean coast. Enjoy the so-called Pearl Islands in the south of the Gulf of Panama - an archipelago of 227 islets with fantastic nature. Relax on the picturesque Caribbean coast on the paradisiacal islands of Bocas del Toro and on the still very pristine San Blas Islands.

Janosch's "Oh how beautiful is Panama!" with the lovable tiger duck is certainly familiar to us all... Let yourself be enchanted by the many surprises of this almost undiscovered travel destination.

Our types of travel in Panama

Your desired trip to Panama

You can get to know the friendly population, paradisiacal dream beaches, fascinating cloud forests and breathtaking underwater world on your Panama round trip.

17 days Rundreise 2 up to 6 travellers

Let yourself be inspired by unspoilt nature, coffee and chocolate factories and many possible activities. The icing on the cake at the end of the trip is the partial crossing of the Panama Canal!

25 days Rundreise 2 up to 6 travellers

Within four weeks, experience a journey at the pulse of Central America through the four countries Guatemala, Honduras, Nicaragua and Panama.

28 days Rundreise 2 up to 6 travellers

Conquest and its consequences - a search for traces in Mexico
500 years after Hernán Cortés landed in the Aztec empire. Experience a unique journey to the advanced civilisations of Mexico. 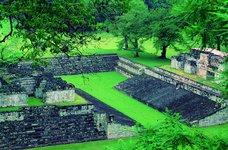 Cultural highlights: Experience a journey to the highlights of Guatemala and Honduras. Immerse yourself in the colourful markets of the highland indigenous people.

12 days Bestseller 2 up to 12 travellers

Country information on PANAMA: „Much more than a channel...

Panama forms the bridge between Central and South America. The country borders Costa Rica to the west, the Pacific Ocean to the south, Colombia to the east and the Atlantic Ocean to the north. It covers 75,517 square kilometres, of which 1,432 square kilometres belong to the so-called Canal Zone. Panama occupies the narrowest part of the Central American land bridge, which is broken here by the Panama Canal and thus connects the Pacific with the Atlantic. After independence from Spain, Panama became part of Greater Colombia. It was not until 1903 that Panama gained its independence from neighbouring Colombia, when US troops occupied the area around the canal, which was under construction. Afterwards, the country was under the influence of the USA for a long time, under whose sovereignty the Panama Canal was opened in 1914. Since then, it has been one of the most important waterways in the world, with around 14,300 ships a year travelling along its 82 kilometres. In 1999, the USA finally ceded full control of the Panama Canal to the state of Panama. Thanks to the revenues from the canal, Panama is now one of the richest countries in Latin America. As a natural land bridge, Panama connects North and Central America with South America. As a result, some animal species from both parts of the Americas can be found here, such as the agoutis, the tapir or the harpy bird of prey. It is estimated that around 300,000 species of insects live in Panama. Almost 30 % of the land area has been set aside in 15 nature parks for the protection and preservation of native flora and fauna. Natural regions worth visiting in Panama are located on the Pacific coast, on the Caribbean coast and on the Azuero peninsula; the province of Darien with its almost impenetrable tropical rainforest should not be visited for safety reasons.

Panama City is located on the Pacific Ocean and forms the southern entrance to the Panama Canal. The metropolis is home to almost 1.5 million inhabitants and is the economic and financial centre of the republic. In the country itself, Panama City is always referred to simply as Panama.

The beautiful beaches and resorts along Panama's Pacific coast are all located between Panama City and the border with Costa Rica. Farallón, about 90 minutes west of the capital, is where most of the big beach hotels are located.

The picturesque Caribbean coast includes the paradisiacal island worlds of Bocas del Toro on the border with Costa Rica, as well as the still very pristine San Blas Islands, inhabited by Kuna Indians, which border Colombia. Also on the Caribbean coast is Panama's second largest city, Colón, which is home to a globally important free trade port, but is otherwise considered rather dirty and not very safe.

In the far western part of Panama, fairly centrally located on the isthmus, lies Boquete. It is a small welcoming town in a valley surrounded by the undulating foothills of the Central American Cordilleras. Here in the mountains, you leave the tropics and the sultriness of Panama behind. The landscape is impressive and is also called "little Switzerland".

Land area: a good 75,500 sq. km - of which 1,432 sq. km is the canal zone.
Population: 3.4 million - approx. 70 % mestizos, 10 % whites, 13 % coloureds and 6 % indigenous people
Capital: Panama City with approx. 1.5 million inhabitants Highest mountain: Barú Volcano (3,476 m)
Form of government: Presidential democracy
History: The country became independent from Spain in 1821 and from then on belonged to Greater Colombia. Only in 1903 did it become an independent state as Panama.
Economy: Over 50 % of the country is used for agriculture. But it is above all the user fees for the Panama Canal that have an impact on the economy. The main exports are traditional agricultural products such as bananas, sugar cane and coffee. Panama's fishing grounds are very good, with shrimp being the main export.
Currency: Balboa
Language: Spanish
Festivals: Carnival de las Tablas (4 days before Ash Wednesday), Festival de la Mejorana (week-long folklore festival in Guarare in September), Ferias del Mar (4 days in September in Bocas del Toro with a large market of handicraft products and musical performances), Fiestas Patrias (Independence Day and National Flag Day on 3 November with a large parade in Panama City)

Entry requirement: The passport must be valid for 6 months at the time of entry. A return or onward travel ticket must be presented. Sufficient funds or a credit card must be presented.
Vaccinations: No compulsory vaccinations
Climate/Travel time: Temperatures in tropical Panama are constant all year round with high humidity. The average temperatures at the sea and in the lowlands are between 27 and 30°C. The temperature in the summer is always very hot. It always gets very hot around midday and generally cools down at night. In the mountains, the climate is spring-like, with cool mornings, evenings and nights from November to April. With the exception of the months of December to April, rainfall is to be expected daily. Most of the time, however, the rains are short-lived. Hurricane season is from June to November.
Best time to visit: December to April
Local time: CET -6 hrs, during European summer time -7 hrs.