Travel in Uruguay, the fascination and beauty of tranquillity - INTI Tours

Deceleration in the land of the pampas

Experience deceleration in the land of the pampas on our tours in Uruguay: lovingly maintained vintage cars and mate cups in the hands of the Uruguayos...

Uruguay - that is a place full of promise. And this despite the fact that there are no tourist highlights in Uruguay like in some of the neighbouring countries. It is the proverbial cosiness with which the people go about their daily lives. It is the many old-timers, beloved by their owners, in the normal cityscape and townscape. It is the hot bitter drink mate, which is literally drunk everywhere - always ready for a little chat. All this gives Uruguay its very own character.

The inhabitants themselves describe their country as a "house with a garden". The "house" is the capital Montevideo, which is well worth seeing and competes with Buenos Aires for the rank of birthplace of the tango. The "garden" is the hilly green countryside with its beautiful estancias, most of which live from cattle breeding. Such typical estancias now cater to visitors so that you can share in the authentic life of these people. This includes gauchos as well as an asado - a barbecue with meat galore. Not to be forgotten are the beaches - sophisticated as in Punta del Este or unspoilt with wildlife watching opportunities.

Let yourself be touched by the serenity of the Uruguayans.

Our types of travel in Uruguay

Your dream trip to Uruguay 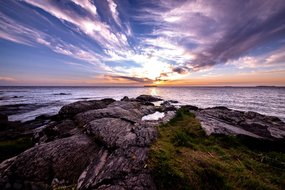 25 days Individualreise 1 up to 6 travellers 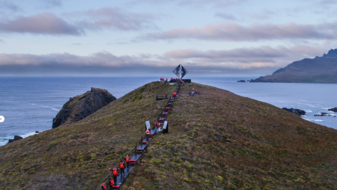 On this trip you combine Patagonia, a cruise around Cape Horn and Tierra del Fuego, colourful desert scenery, the Iguazú waterfalls and dream beaches in Uruguay.

32 days Rundreise 1 up to 6 travellers

Argentina: Along the Andes in the North...

Experience northwest Argentina, where the earth paints natural watercolours of all colours across the mountains, and where wind and water erosion have formed bizarre shapes and valleys.

14 days Bestseller 8 up to 16 travellers 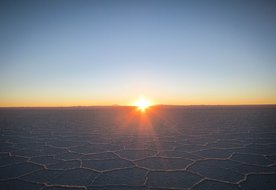 The above-mentioned flights produce climate-relevant emissions of about 7,960 kg per person. By making a voluntary contribution of 190.00 euros to atmosfair, you can help to relieve our climate.

19 days Bestseller 6 up to 12 travellers 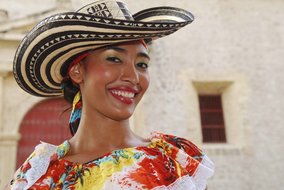 Colombia is a fascinating travel destination that is just being discovered by tourism. Experience on this trip the impressive facets of Colombian nature and culture - original and unspoiled.

13 days Bestseller 4 up to 12 travellers 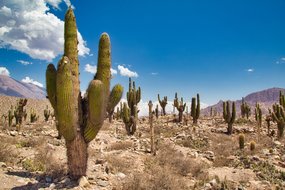 Individual sample tour in northern and central Argentina: From the penguins to the colourful northwest and the Iguazú waterfalls.

Uruguay is the smallest Spanish-speaking country in South America, only Suriname is smaller. With an area of just under 177,000 square kilometres, Uruguay is about half the size of Germany, of which around 2,600 square kilometres is water. It borders Brazil to the north, the Atlantic Ocean to the east, the Río de la Plata to the south and the Río Uruguay and thus Argentina to the west. After the European settlers reached the region, the horses and cattle they brought with them and abandoned on the vast grasslands of the pampas developed into huge herds that formed the basis of the country's economic wealth. Today, Uruguay is one of the most stable, democratic and prosperous countries in Latin America. In Uruguay, most of life takes place outdoors because of the good weather. Uruguayans love to socialise and drink the bitter mate almost everywhere. The country's name Uruguay comes from the indigenous Guaraní language and means something like "river of colourful birds".

Montevideo is located at the mouth of the Río de la Plata, so to speak opposite the Argentine capital Buenos Aires. The port city has a good 1.3 million inhabitants and is the economic, administrative and cultural centre of the country. Montevideo is one of the ten safest cities in Latin America and, according to a study, is also the South American city with the highest quality of life. In Ciudadela rises the only remaining section of the city wall that once surrounded the entire settlement. Today, this is the entrance to Montevideo's old town with many churches, museums and theatres. At night, the neighbourhood awakens with nightclubs, bars, etc. where tango and condombe are played.

Uruguay as a travel destination:

Uruguay is practically the geographical extension of the Argentinian pampas, so the south of the country is almost flat. Along the Río Uruguay there are extensive swampy plains that are frequently flooded. In the centre, tableland spreads out, rising in chains of hills to the country's highest elevation, the Cerro Catedral at only 514 m.a.s.l., which is why Uruguay has an overall hilly character. Overall, the country is very flat, only ten percent of the land area is higher than 200 metres above sea level. The coast in the southeast is strongly indented by shallow beach lakes and lowlands. The soil is generally fertile and is therefore used for agriculture almost everywhere. Forests make up only a small part of the country's surface, about five percent.

Facts and figures of Uruguay:

Land area: 176,215 sq. km
Population: Around 3.5 million people live mainly in the cities, just under half of them in the conurbation of Montevideo. For a long time, Uruguay was extremely attractive to immigrants; at the beginning of the 19th century, half of Montevideo's inhabitants were foreigners.
Capital: Montevideo with a good 1.3 million inhabitants, almost 2 million people live in the conurbation.
Highest mountain: Cerro Catedral, 514 m.a.s.l.
Form of government: presidential republic
History: The poverty of natural resources made Uruguay an insignificant province of the Spanish Empire for a long time, later its importance lay more in its geographical position as a buffer between Argentina and Brazil. In 1624, the Spanish founded their first settlement. After Argentina broke away from the mother country, negotiations for a confederation of the Rio de la Plata states began in 1814, but failed. Civil war now broke out in Uruguay, which had broken away under General Artigas. Argentina intervened and occupied Uruguay. The years until 1820 were marked by war. It was not until that year that Uruguay became independent again. Many differences with neighbouring states and internal unrest plagued the country. It was not until 1985 that the country found its way back to democracy. Since then, Uruguay has settled its disputes with neighbouring countries.
Economy: For a long time, Uruguay was considered the Switzerland of Latin America because of its strongly developed banking sector. To this day, Uruguay is one of the most highly developed countries according to the United Nations. In retrospect, however, the heyday of the early 20th century is over. Back then, the export products meat and wool brought money into the coffers; today, the foreign debt continues to rise. The country was also affected by the economic crisis in Argentina. Today, the main export products are meat, rice and leather, mainly to Brazil, Argentina, the USA and Germany. Besides livestock, the other economic sectors play only a small role. The service sector already accounts for 62 %.
Currency: Uruguayan New Peso
Language: Spanish
Festivals: Uruguay's carnival is said to be the longest in the world. Up to 70 Candombe and Murga carnival groups, called comparsas, walk the streets celebrating to the rhythm of drums.
In Paysandú on the Rio Uruguay, carnival and Semana Santa (Holy Week) are also celebrated in a big way. During this time, the largest beer festival in the country takes place there.

Entry requirement: The passport must be valid at the time of entry. A lost passport must be reported to the nearest police station. This notification is required for the issuing of the new German passport and for leaving Uruguay. German tourists do not need an entry visa for a stay of up to 90 days if they enter the country with a valid passport. In principle, a one-time extension of stay can be applied for at the immigration office in Uruguay shortly before the 90 days expire.
Vaccinations: There are no compulsory vaccinations for Uruguay. A yellow fever vaccination is not mandatory or required for travel to or from Uruguay to a third country. Uruguay is considered malaria-free.
Climate/travelling season: Basically, the seasons are the opposite of those in Europe. The climate is subtropical-humid. This means that there are no distinct rainy and dry seasons. Rainfall is distributed throughout the year. Summers are pleasantly warm and not tropically hot. However, temperatures can reach 40 °C in the interior. Winters are also only moderately cold, comparable to autumn in Germany. The coldest month is July with about 7 °C mean minimum temperature. Snow and ice are unknown in Uruguay. December to February is the best time to go swimming. Then the water temperatures are warm enough (20 - 22 °C). For round trips, spring (October/November) with mild temperatures is suitable.
Local time: The time difference is minus 4 hours according to Central European Time (CET), during European Summer Time the time difference is minus 5 hours.